I read a comic 'DEATH NOTE'.
It's a great comic! 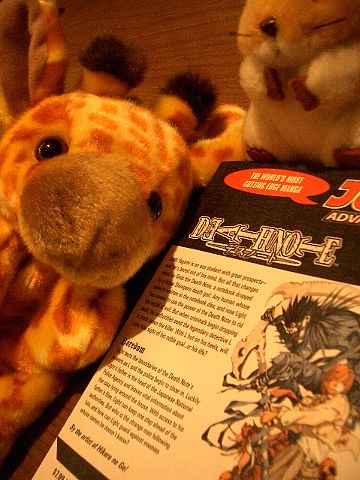 Story...
Light Yagami is a very clever student.
He picked the Death Note. This note was dropped by Shinigami death god.
Death Note has a power what can kill humans...

The 'DEATH NOTE' is more popular in Japan.
There is the movie DEATH NOTE (in Japanese).

By the way, Takeshi Obata the illustrator of 'DEATH NOTE' was arrested in yesterday.
The cause is illegal possession of knives.
He had knife of 8.6 cm.
Arrest? This knife's length! It's hard to understand.

Cartoonist Takeshi Obata, author of the famous "Death Note" manga series, has been arrested for illegal possession of a knife, police said.
An officer questioned Obata, 37, in Tokyo's Nerima-ku after he was driving his car with the headlights off shortly before 1 a.m. on Wednesday.
Obata, from Musashino, was arrested on the spot for possessing a knife.
Obata made his debut as a cartoonist in 1989. He won a prize for his work, "Hikaru no Go," in 2003. (Mainichi)

His car's the headlights!

A Japanese news page's title is Attributable Light! Takeshi Obata the illustrator of 'DEATH NOTE' was arrested. (in Japanese)

Attributable Light!
Light Yagami and the headlight! It's a joke :-P